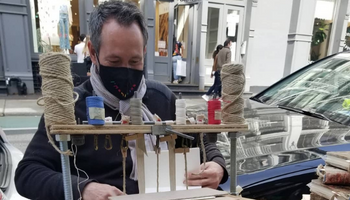 NY NOW Retail Store Visit Highlight from @amy.atnynow featuring @one_eighty_five Be sure to check out their IG accounts.

It’s the trait of so many cities… talented artisans set up right in the streets selling their goods. It is in SoHo’s DNA. Sometimes they are even creating them there, catching your eye as you walk by. One table caught my eye. I admit the white and red floral, toile like tablecloth was to my liking. But it really was just highlighting the raw wood, exposed book constructions and succulent planters displayed perfectly on top of it. It was there in front of 120 Prince off Greene St that I met Robert and became aware of @one_eighty_five

OEF is a Brooklyn-based wood shop offering a variety of hand-crafted wood products founded by artist and veteran photojournalist Robert Stolarik. Robert designs and builds every work he sells in his basement studio. His unique aesthetic combines romantic notes with vintage wares. While he creates with his Brooklyn home in mind, his craftsmanship is influenced by an extensive career that has taken him all over the world.

Robert is an award-winning photographer; he was a regular contributor to The NY Times for 20 years. Born in NYC, he began his journalism career covering conflicts and general news in the US, Europe, Latin America, and the Balkans. For the past decade, he focused his reporting on social and criminal justice issues including groundbreaking coverage of stop-and-frisk policies, Hurricanes Katrina and Sandy, the Haitian Earthquake, and the unrest in Ferguson and Baltimore.

It makes sense to me that Robert’s photographic work that exposed local and global conflicts has manifested into creating these beautiful and exposed journals. Check out his website and if you’re in the area, look for him on Prince St